Witch of the Swamp

Witch of the Swamp is one of the easiest adventures. It has a linear path (you attack one camp after another, but can't skip any to jump ahead) organized in a decreasing spiral through the swamp, with the Boss in the Witch Tower at the center of the island.

Great map for players at all levels with great XP to loss ratio but weak rewards at higher levels.

There is an approximate 20% chance that the final reward will be the Old Friends Adventure.

There are 4 achievements for this adventure:

Refer to the Combat page for more information. Generally, the lowest quantity/cost troop combination is listed but higher cost/value troops can be substituted to boost the odds toward losing 1-2 less troops. So use of elite soldiers, longbowman and crossbowman is at your discretion but most likely will not change the outcome very much depending for any particular battle. Likewise, more troops than listed can be sent if capacity of the general permits but in most cases will not affect the outcome.
Quicker: Several camps can be skipped. By skipping camps you will receive less XP (3400), but it will save you time and troops.
Additional guides for Witch of the Swamp available here.

The following enemies are found in Witch of the Swamp adventure. 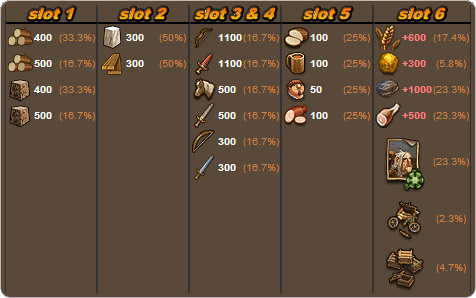